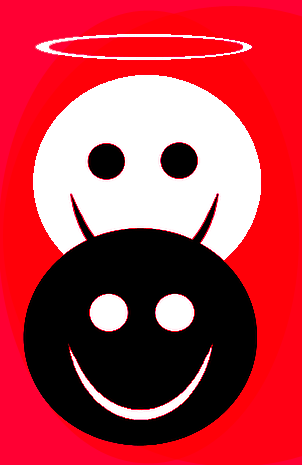 The Catechism of the Catholic Church speaks about Moral Conscience.

1776 "Deep within his conscience man discovers a law which he has not laid upon himself but which he must obey. Its voice, ever calling him to love and to do what is good and to avoid evil, sounds in his heart at the right moment. . . . For man has in his heart a law inscribed by God. . . . His conscience is man's most secret core and his sanctuary. There he is alone with God whose voice echoes in his depths."

1777 Moral conscience, present at the heart of the person, enjoins him at the appropriate moment to do good and to avoid evil. It also judges particular choices, approving those that are good and denouncing those that are evil. It bears witness to the authority of truth in reference to the supreme Good to which the human person is drawn, and it welcomes the commandments. When he listens to his conscience, the prudent man can hear God speaking.

1782 Man has the right to act in conscience and in freedom so as personally to make moral decisions. "He must not be forced to act contrary to his conscience. Nor must he be prevented from acting according to his conscience, especially in religious matters."

Speak out against killing

Having been a Catholic priest for 25 years 40 years ago, and having read books like "The Last Week" by Marcus Borg and John Dominic Crossan and "Christian Attitudes Toward War and Peace" by Roland Bainton, I am convinced that one of the ways to identify a true follower of Jesus is to see if they are against all wars, all killings. I question whether the Catholic Church is a true follower of Jesus since one does not hear from all the Church's priests and bishops that we must be against all wars and killing. What are the priests who are officers in the military preaching? Are there any Bishops who condemn the nations in which they serve for the killing they are doing? Could the Quakers be the authentic churchgoers who truly follow Jesus command to put away the swords?

In the 1960s as a priest and with the approval of our Bishop we began a new kind of parish. NPR spent an hours program in 1968 on the "New American Catholic". And we were on that program: http://www.nbcuniversalarchives.com/nbcuni/clip/51A06327_s01.do

We lasted till 1976 when our new Bishop took my priest faculties from me. Today I cherish my life as a priest and my life thereafter. And I have been told that the new Bishop had it in his documents to shut our parish down. And I think this is true.

I must tell you that I became a Family Therapist while in the priesthood and Bishop Reed payed for my way to Columbia University to get a master's degree in the field. Thus I was able to earn my own living. While I left the priesthood, or was pushed out, in 1976, I continued my life in Oklahoma City and had many contacts and teaching from and with Virginia Satir, one of the leading Family Therapists in the U.S. and around the world. Another person in her group was Anne Robertson. Anne was divorced by her husband in the late Seventies. In October of 1982 Anne and I were married. Anne died in 2005.{jcomments on}

“The four questioning cardinals have raised 5 questions. Though addressed directly to the Pope, indirectly they are five bombshells (especially the central issue “Conscience”) thrown into the midst of a crowded market place (the whole world looking and listening to a Pope they admire) to see how many approve or object in to day’s world of free speech, discussion and dialogue. Rome has spoken and let discussion in all earnest start. james kottoor, editor).”

The view of the four cardinals can be summed up in their words, “The entire sinister program, the centerpiece of Bergoglianism, is summed up in Francis’ shocking declaration at ¶ 303 of Amoris: Yet conscience can do more than recognize that a given situation does not correspond objectively to the overall demands of the Gospel. It can also recognize with sincerity and honesty what for now is the most generous response which can be given to God, and come to see with a certain moral security that it is what God himself is asking amid the concrete complexity of one’s limits, while yet not fully the objective ideal. In any event, let us recall that this discernment is dynamic; it must remain ever open to new stages of growth and to new decisions which can enable the ideal to be more fully realized.”

In Jesus’ own words these four cardinals are the Pharisee mindset of our time.

Jesus was always clear:  Legalism does not trump Love.

Practical application of Primacy of Conscience

Roman Catholic teaching on the primacy of conscience in matters of faith and morals is unequivocal: the person is alone with God to listen to God in examining conscience.

The Church's official teaching, the collective but sometimes fallible wisdom of the Church in matters Ordinary, is secondary.

Primacy of conscience goes directly to the question, what does it mean to be Roman Catholic?

A woman decides as a matter of conscience to keep her life for her six healthy living children rather than sacrifice her life for her unborn twins, one of whom now dead will poison her to death in days. It is the beginning of the ninth month. Both fetuses are seriously deformed. The other twin alive but expected to die a painful death within hours of delivery.

Surely in the eyes of a merciful Church she has committed no sin in choosing her life over death in this tragic and painful circumstance.