Articles in this topic (Envisioning)

The Serenity of Pope Francis

by Clyde Christofferson (pictured with his grandchildren) 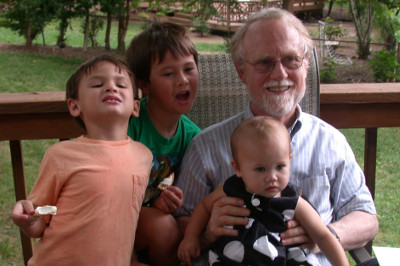 Francis was speaking to an Italian family association (at Forum delle famiglie, on June 16, 2018) and interrupted his remarks to give an off-the-cuff condemnation of “eugenic” abortion and “fake marriage”. The editor of The Catholic Thing, a conservative publication, took heart in this and wrote an article that expressed concern rather than hope that Francis would now more fully back traditional Catholic doctrine.

Pope Francis continues to speak from the heart, with a serenity that doesn't fit neatly into either traditional or progressive categories.

Maybe that's the point. The idea is to be more loving. It was the shift from law to "loving one another" that was Christ's "new covenant".

As the article notes, Francis has criticized "Catholics who are constantly 'insisting' and 'obsessing' on life issues and marriage." Maybe there is some balance here, the same kind of balance that Christ preached by shifting from law to love in the "new covenant". There was something different in what Christ did. It wasn't a doubling down on the law.

Perhaps Francis is criticizing both traditionalists and progressives, because both these groups of Catholics seem overly focused on Church doctrine, either to keep it or to change it, to the point of distracting from the sole purpose of doctrine, which is to direct our attention (Francis uses the term "gaze") to God's self-revelation in Jesus Christ by the power of the Spirit (see Dei Verbum #2).

There is something significant about discernment, about getting in touch with the Spirit of Christ "written on our hearts". Francis keeps emphasizing the importance of having more discernment in our Church, as he did last January with the Jesuits in Chile. We can cope with our sinful nature -- our more primitive inclinations -- the easier way or the harder way. The easier way is with the law, which is clear and requires interpretation and resolve. The harder way is discernment, which requires building a relationship with the living presence of God in our hearts.

These are both good and helpful ways. But Jesus saw an imbalance in Jewish preoccupation with the law and preached the "new covenant" -- the harder way -- in response. Francis is following in the footsteps of Jesus and is risking a sort of "virtual Crucifixion" from those -- both traditionalists who want to keep the law as it is and progressives who want to change it -- who are preoccupied with doctrine.

I think Francis gets it. The reign of God which Jesus preached is not about law. It's about shifting our attention toward loving one another, not some "lovey dovey" kind of love but the harder way of building a relationship with Christ, by the power of the Spirit. It's that kind of relationship through which we can experience the priority of love that Jesus spoke of in Matthew 22:40 and the freedom from the law that Paul spoke of in his Letter to the Galatians. The law remains useful in pointing toward Christ, but not if we use the law as a substitute for discernment.

So I disagree with the article to the extent that it expresses some measure of concern over the direction that Francis is leading us. There is no doubt about his direction. He has been perfectly clear. But his clarity in Christ remains an anxiety for those who are preoccupied with Church doctrine, whether to preserve doctrine or to change it. It is noteworthy that Francis has left doctrine alone. He clearly hopes that we will shift our gaze to Christ.

Vatican II began this shift, but these things take time. We are just human beings. The serenity of Francis in the face of all this is a comfort, at least to me.